Find Your Favorite Way To Listen Below!

What makes butterflies so magical? They are a wonder and a delight, and I’m so excited to be diving into a full episode about what is possibly the most iconic species of butterfly in the world: Monarchs. Have you ever wondered why they’re bright orange, how far they migrate, or why they capture our collective imagination? I have! Come with me to the Pacific Grove Monarch Sanctuary to find out more about these creatures that are as graceful as they are legendary.

Monarchs and The Day of the Dead

Western Scrubjays are Capable of Metacognition

You can find me @goldenstatenaturalist on both Instagram and TikTok

You can support the show on Patreon here: www.patreon.com/michellefullner

The theme song is called "i dunno" by grapes, and you can find the link as well as the Creative Commons license here.

Note: This transcript was made by robots and may be a little wonky. 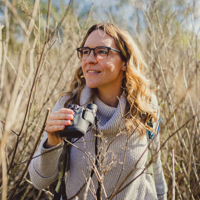 Michelle Fullner
0:00
Hello and welcome to Golden State naturalist, a podcast for anyone who's ever forgotten to bring their binoculars on a trip that was specifically about looking at tiny creatures in a far off tree top.

Email has been submitted.